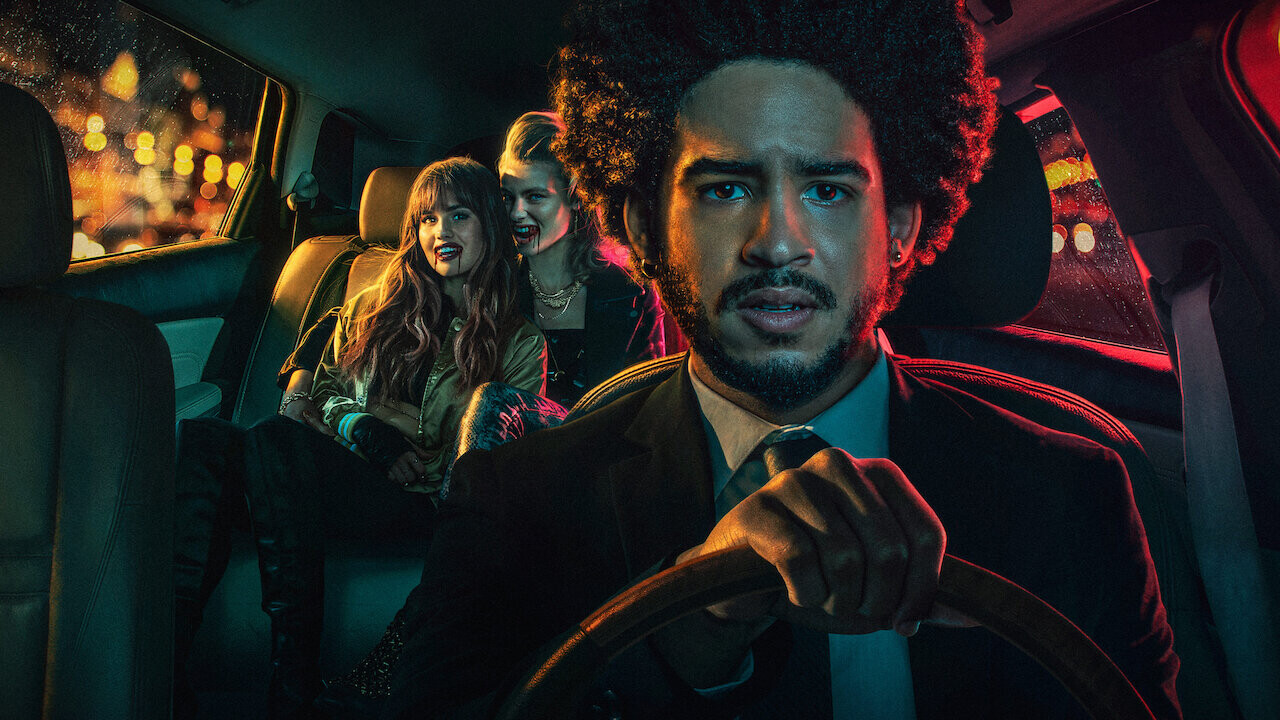 On October 20, Netflix premiered Fauces de la noche. A film from the year 2021 that brings us as the protagonist a young university student without much fortune in life and with a brother who has a hidden secret that goes beyond the paranormal. In a casual way he will be involved in an adventure where he will become, against his will, the driver of two attractive vampires who will take him on a journey full of action and fights. A race before he wakes up that he has like objective to turn vampires into the kings of the city, and why not? … of the world.

The most popular streaming platform continues to bet on the world of vampires. A few months ago he brought us two rather disturbing versions that deal with these beings of the supernatural. With Blood Red Sky, we were introduced to a vampire who fights her ‘her illness’ but must use it to save her daughter’s life after the plane she’s traveling on is hijacked. And then we have the peculiar vision of this world that Mike Flanagan brought us. A twisted story where psychological terror takes us to an island where nothing is what it seems: Midnight Mass.

This time, Netflix is ​​committed to a story that is not scary, turning vampires into warriors who they struggle to get out of the anonymity to which an ancient pact has led them. A war to end the past and bring to the world a new law where vampires are no longer hidden and sheltered by the security of the night.

If we think that the objective of any series or movie is to entertain, then we have to say that Maw of the night achieves its objective. Especially in the first part of it. The innocence of young Benny (Jorge Lendeborg Jr.) leads us to situations where the viewer knows what is happening beforehand. A point in his favor to create that hype where you expect the impromptu chauffeur to discover for himself the mess he has gotten himself into.

It is in this first part where we will also feel the attraction that exists between the young man and one of the attractive young women he has to take from party to party before the sun rises: Blair (Debby Ryan). A young vampire with a heart not as dark as her traveling companion Zoe (Lucy Fry). Zoe is the girlfriend of the one who should be the bad guy in the movie, Victor (Alfie Allen); a vampire who wants to end an ancient pact that subjugates his kind to live in anonymity.

Between the three young bloodsuckers, they have hatched a plan that will the domination of the vampire race on the face of the earth. I have to say that Victor is not scary. The role of him as a very bad bad guy is lame and sometimes even a little sad. Fauces de la noche does not give, at any time, that sensation necessary to make a script believable, that the bad guy is going to achieve his goals. It lacks that charisma that makes us ‘suffer’ for the good. and he also does not know how to convey that tension and suspense to know how the story will end.

Maw of the Night opens with one of the few suspenseful scenes you’re going to see in the entire film, and it’s not that big of a deal either, as it’s not really looking to scare or have you sitting on the edge of the couch. It will be in those first seconds where they explain to us the pact that was carried out for the safety of the human and vampire races. A pact that is protected by mysterious human guardians led by Jay (Raúl Castillo), brother of an innocent Benny who lives outside this parallel world.

The plot unfolds in one night. Victor has prepared his plan and to do so he must first kill Jay and two female vampires belonging to the upper echelons of the night world. Jay works as a high class private chauffeur. He agrees to let Benny cover for him that night, while he dedicates himself to safeguarding the peace between humans and vampires. But just this change will lead the young man to fall into the hands of Jay’s enemies.

As is logical, Benny will be confused with Jay and two vampires will want to end his life. The moment the confusion is discovered, the plans change and they decide to hold the young university student hostage while they continue with their plan eliminating anyone who poses a risk to their objective.

Megan Fox, Sydney Sweeney and Maw of the Night.

The film has the added attraction of having among its cast two of the most sought-after actresses of the moment: Megan Fox and Sydney Sweeney. Something that is quite a disappointment when you discover that they are just one more advertising claim to attract the viewer. Personally, I don’t understand this mania for making trailers where they sell us something that we don’t see later, just as I don’t understand promoting a movie with attractive names that only appear on screen for three minutes.

If you are going to see Maw of the Night called by those two actresses, I warn you that you are going to be disappointed. His role consists of a filler scene in a luxurious mansion, where they face Victor without blood. A brief conversation where words are the weapons they will use, giving an end to the scene that we do not see but that we assume.

If you are looking for a movie that surprises you, don’t watch it. Everything in Maw of the Night becomes predictable, but they have managed to compensate with scenes where they mix an almost imperceptible comic side with action and unbridled fights. All this bathed with that romantic history that is being born little by little between Benny and Blair.

It also has an attractive visual section, although it is true that we have missed some other special effect. A mixture of colors and decorations that, together with its music and an action full of fights of all kinds, manage to create an acceptable and entertaining vampire climax. Of course, do not wait any longer, Maw of the night is that, and there is nothing else in it.

do you like all the series and movie merchandising? Don’t miss any of our deals!!

Nivea Men raffles a double VIP ticket for the classic